Better than Burgundy? That’s a pretty provocative title, and even I don’t dare publish it without a question mark at the end.

Is it a meaningful question? Even setting aside the fundamental question of what it means for a wine to be “better” than another, English wine production and its counterpart in Chablis and on the Cotes d’Or and Chalonnaise are so different that the question of comparison may seem absurd. Burgundy is an enormous industry, with a continuous commercial winemaking history stretching across many centuries, and the price range per bottle covers five orders of magnitude; English Chardonnay and English Pinot Noir is new, small-scale and you would struggle to spend over £40 a bottle.

Perhaps the only level at which the question makes sense is if it is taken as asking if one generally offers better value than the other, and even here it would have to be within the £15 – £30 price range which English Chardonnays and English Pinot Noirs generally sit. But, the range of Burgundy at this level is huge and generalisation too hard.

However, I think that what can be said with conviction, backed by data, is that both the quantity and quality of English Chardonnay and Pinot Noir is increasing at a great pace. And while we may not, nor indeed may never, have English wine producers spoken of in the same breath as Domaines Romanée-Conti or Leflaive, we also do not suffer from bottles of inferior quality that manage to sell simply from having the name of a famous region emblazoned on the bottle. With a climate and wine economics that makes English Sparkling Wine the easy destination for Chardonnay and Pinot Noir grapes, it takes passion and determination to go for the still option. While these characteristics alone don’t guarantee a good bottle of wine, they surely take you a long way there.

Enough preamble. Here’s a triumvirate of Chardonnays and a trio of Pinot Noirs from our stocks that exemplify the best of English still wines

One of England’s few organic vineyards, Davenport have now been established for a good quarter century. Will Davenport travelled the wine world widely before establishing his own vineyard and winery, learning through working and studying in Alsace, California and Australia. Their vineyards now extend to 24 acres, mainly in Kent, but also with some close to the winery in Sussex. Their still Chardonnay is only produced in the best years, and interestingly this is a non-vintage blend of 2014 and 2015. The blended wine has spent 12 months maturing in large oak vats, leaving a hint in the flavours but no more; more important perhaps for its textural effect, rounding out the wine to a svelte shape and silky texture; the Burgundian parallel would be a Premier Cru Chablis. There are powerful ripe green apple and lemon notes, with a swirl of lime and pear on the decently long finish.

A great value English Chardonnay from England’s largest wine producer. Chapel Down have selected grapes from the chalk soils of the North Downs of Kent for this wine from a great vintage, when excellent phenolic ripeness was achieved. The wine underwent full malolactic fermentation and spent several months on lees prior to bottling on August 2015, which has given an extra dimension of complexity to the flavours and texture. The fruit bowl descriptors span all the way from apple to pineapple in terms of tart to tropical, but this is not a flabby fruit salad – the pH is only 3.04 and it has a wonderful lightness to it. Winemaker Josh Donaghy-Spire has done a great job with the excellent raw materials at his disposal.

This wine has deservedly won many awards and plaudits. Gusbourne position themselves at the premium end of the market for both English Sparkling Wines and still English wines, but this is based on a solid foundation of careful vineyard management and superb winemaking talent in the hands of Charlie Holland. With the success of their sparkling wines, it is a minor miracle that they let any Chardonnay and Pinot Noir escape into the still wines. Thank goodness they do, as the Guinevere is an exceptional English Chardonnay. They also utilise more oak than most English wine producers dare to use – 10 months in French oak of which 20% is new – but the fruit, acid and oak are in perfect harmony and the toasted almond and baked vanilla oak notes meld beautifully with the ripe lemon, peach and honeydew melon fruits. As with all great wines, each sip seems to reveal a slightly different expression, with more to uncover. Well worth the premium.

I have written about this wine elsewhere but make no apologies for highlighting it again. Beautifully balanced, ethereal but complex, with layers of raspberry, cherry, strawberry, vanilla and some smoky toast washing around the mouth in an entrancing interplay – far more interesting and satisfying than many a Burgundy at this price! Robb and Nicola Merchant planted their first vines in 2008 on just 5 acres of land near Monmouth in Wales. They are achieving great things from this small plot. I’m sure that Oz Clarke enjoyed a glass of this wine when he recently visited.

While they may be best known for, and built their brand on, rosé, Hush Heath have produced some lovely still whites and reds over the years, including their award-winning Liberty’s Bacchus 2018. The recently released Luke’s Pinot Noir, named after the producer’s eldest son, is certainly going to be in the running for medals in the next round of competitions. It is in classic cool-climate Burgundy style, delicate but deep, with brief ageing in both French and American oak to strengthen its sinews. Raspberry, red cherry and spicy vanilla, this is delightful savoured on its own but even better accompanying a game bird.

The team at Court Garden continue to punch above their weight. Awful as it sounds, the foot-and-mouth outbreak that hit their sheep farming in the early part of the millennium might have secured their long term future on their land in Ditchling, Sussex, just down the road from Ridgeview (a road I walked in the April sunshine this year). Sheep farming, like almost every agricultural endeavour – apart from viticulture?! – is trending toward super-size outfits. The outbreak of this devastating disease was the spur for diversification, with the first vines planted in 2005. The father-and-son team of Howard and Hugo cover vineyard, winery and marketing superbly between them, as if they were the tenth generation of a dynasty rather than the first and second. Their 2018 Pinot Noir is recently released, and has some reductive struck-match aromas that mellow with aeration, allowing the classic red fruit aromas to float and dominate, with a feather-light presence on the tongue that somehow packs a huge punch of blackcurrant and red cherry with a tease of all-spice on the tastebuds. Fantastic value for money.

This classic cuvée has all the hallmarks of a fine sparkling wine. The subtle fruit on the nose, predominately red berries from the Pinot and a little light citrus from the Chardonnay, and a hint of peach, is backed up by a really long, mouth-filling palate that lingers and satisfies. Fresh and lively, ripe acidity is complimented by a subtle sweetness. Ideal as an aperitif, with canapés. Serve with smoked salmon, fish and seafood, especially lobster, trout or crayfish. Also excellent with mushroom risotto, light chicken dishes and sushi as well as local English hard cheeses. Albury Estate is the Surrey home of the Duke of Northumberland and is situated in an Area of Outstanding Natural Beauty. Their still rosé wine was served on the Royal Barge as part of the Queen’s Diamond Jubilee celebrations. Albury wines are biodynamically produced.  They have won international awards and have been featured on the wine lists of several Michelin starred establishments. 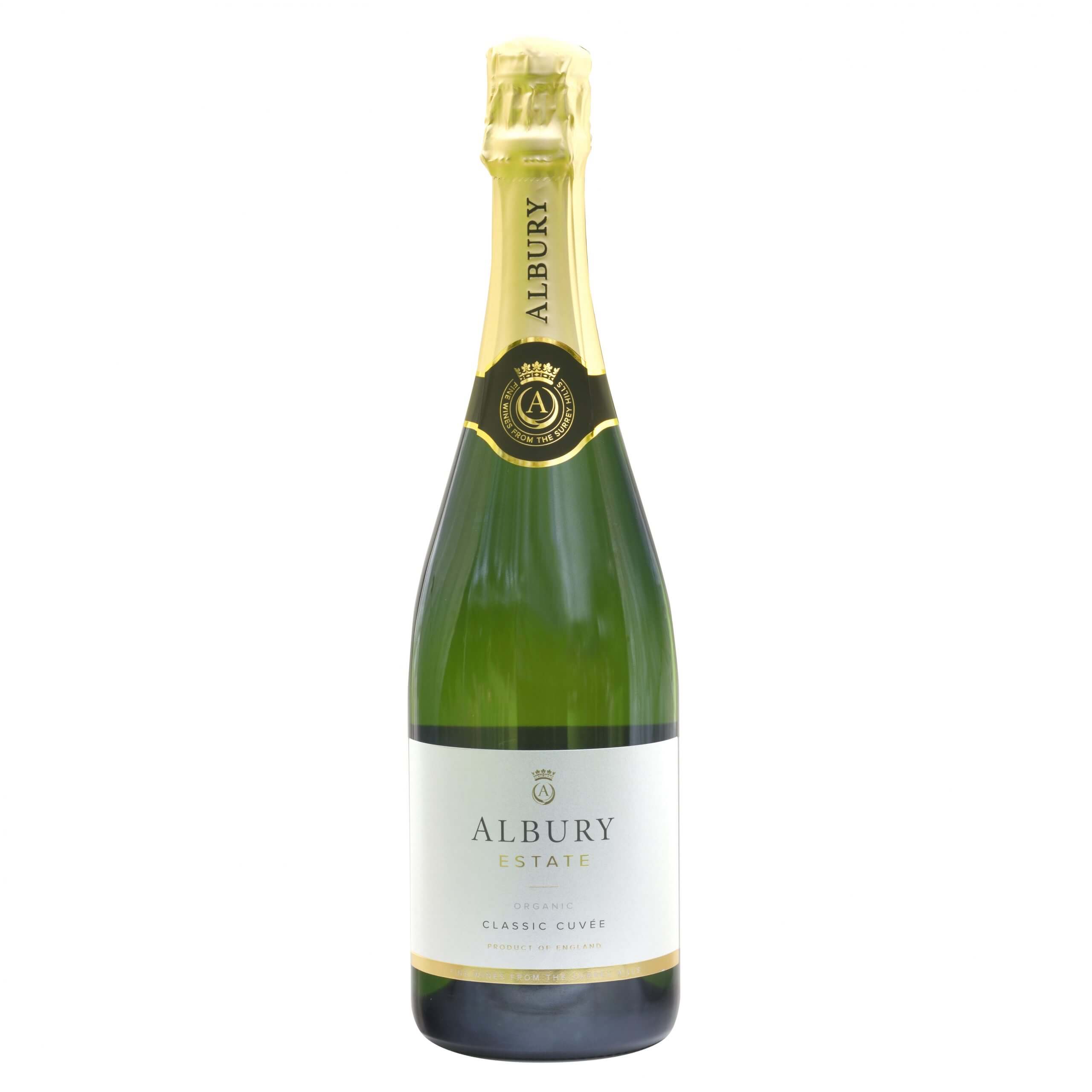