It wasn’t the smoothest of growing seasons, but the end results demonstrate fantastic potential.

Although there were many positive aspects to 2020, including a gloriously warm fortnight in September that helped grapes ripen to perfection, vineyards across England and Wales faced some or all of severe late frost, stronger winds around flowering, an overcast July and a wet October. Those struggling with the impact of Covid-19 on their cellar door activities and sales & marketing strategies could have been forgiven for feeling downcast that nature hadn’t decided to make it super easy for them this year, of all years.

Yet, aside from those worst hit by the May frosts, there is a palpable sense of excitement amongst the winemakers, as the nascent 2020 wines sit in tank or barrel, about the quality of the grapes that they did bring in, and the wines that they are crafting from them. While yields are typically down compared not just to the remarkable 2018 vintage, but also 2019, the bottles that are produced should help cement the English and Welsh wine industry’s reputation for producing absolutely world-class wines of both sparkling and still styles.

You’ll remember the glorious weather that accompanied the first national lockdown – spring began early and March and April were bathed in sunshine; temperatures were above average. Sunshine hours smashed previous records, clocking up more than the average English summer. This meant that vines across the country accelerated out of dormancy at pace. As always in England and Wales, this is not necessarily a good thing, with the risk that a late frost could cause severe damage where vines have progressed to budburst and beyond.

And indeed, this year there were frosts in both late April and then a sequence of several consecutive sub-zero nights in mid-May, which were a disaster for many. Simpsons Wine Estate reported: “we experienced 6 frost incidents between mid-April and mid-May, which is more than average and even with our frost fans in place, we unfortunately suffered some frost damage”. White Castle Vineyard near Abergavenny was devasted on 12th May when four out of their six varieties were damaged by frost. While their Rondo variety made a significant attempt to perform following a second bud burst, overall the total crop was down 65%. Saffron Grange Vineyard in Essex suffered a huge misfortune, with their frost fan failing on the last night of the frosts; 50% of their buds were lost. Another vineyard, wishing to remain anonymous, told us: “frost on the 13th to 15th of May in effect took our harvest with it, I know many others had a similar experience. Such is life, onto 2021…”

Not everyone lost buds. Roebuck Estates in West Sussex, for example, escaped unscathed, putting this down to site selection and the fact their plantings stop well before the foot of the slopes where frosty air settled. Martin’s Lane Vineyard in its fabulous position up-river near the head of the Crouch Valley in Essex, did not experience sub-zero temperatures. Raimes, in Hampshire, and Harrow & Hope in Buckinghamshire are examples of those who successfully fought off the frosts by lighting bougies, no doubt at great expense given the duration of the May frosts.

This resulted in earlier-than-normal harvests for most. Camel Valley in Cornwall completed harvest earlier than they usually begin it! Davenport Vineyards started on 7 September, five days earlier than in 2019, and finished on 9 October, two weeks earlier than last year. Exton Park in Hampshire began picking on 24 September, the earliest start they have ever had. Nyetimber’s first pickings were their second earliest ever, after 2018. As Roebuck Estates said, “You know it has been an early harvest when you look out to the vineyard and the canopy is still as green as a pea, and in great nick!” As Exton Park observed, “the earlier the start to harvest, the better. It allows less chance for the weather to change and for the fruit quality to be impacted”. And indeed, October was very wet, so those able to pick in September avoided any risk of rot and dilution, although, as will be seen below, this does not seem to have transpired even in the later pickers.

And so, how was the fruit quality? The verdict is unanimously extremely positive. At the risk of being somewhat repetitious, here are the words of several of the vineyards we stock:

But what is it exactly that marks the quality of the grapes? Ripeness, above all, in this vintage. Grapes reached sugar levels that are unprecedented. At Martin’s Lane Vineyard the Pinot Noir, Chardonnay and Pinot Gris were recording ripeness levels ranging from 92Oe to 99Oe (12.5% to 13.6% potential alcohol), “a remarkable result by any standard for this country” as Principal Partner Roy Martin put it. Just down the road from them at Crows Lane Estate, a batch of Pinot Noir hit 106Oe, or 14.4% potential alcohol, prompting the genuinely-meant question from someone as to whether they were over-ripe! Who would have thought we’d be having that debate in England?

It wasn’t just Essex clocking up the high sugar levels: reports from Raimes in Hampshire, Ashling Park in West Sussex, and Ancre Hill in Monmouthshire, among others, noted the exceptional natural sugar levels this year. The Pinot Gris at Stopham Vineyard in West Sussex reached 13.5% potential alcohol. The need for chapitalisation (adding of sugar during the winemaking process) was much diminished or eliminated in many cases.

Of course, quality is not delivered by ripeness alone. Balance is required for great wines, and that starts with balance in the grapes. Acidity levels are a hugely important component, perhaps especially so for English Sparkling Wines. Fortunately, on the whole acidity levels seem to have held up, notwithstanding the ripeness. Exton Park stated: “the sugar content and the level of acidity were very nicely balanced”. Nyetimber announced “excellent ripeness, balanced acidity and sugar”.

There was one note of caution from Lyme Bay, who observed that the mid-September heatwave “delivered fruit that was riper than expected causing some challenges for sparkling wine making”. It will be interesting to see how well those English Sparkling Wine producers that major on non-vintage wines manage to retain their house style with this year of extreme ripeness – it may be that we see greater levels of reserve wine than normal in some cuvées.

Another theme of the vintage is the small bunch sizes (whether fewer grapes, smaller grapes, or both), particularly prevalent in the main red varieties of Pinot Noir and Pinot Meunier. Exton Park believe that, at least in their case, this was due to a cooling of temperatures around flowering of their Pinot Noir and Meunier. In other cases, it was related to the spring frosts. Simpsons have said: “the frost almost acted as a natural bud rub/green harvest!”. Whatever the cause, this feature was reported time and again. As mentioned at the start of this report, this typically (although not in all cases) resulted in slightly lower yields in 2020 than 2019, which in turn was well below the exceptional 2018 crop levels. Simpsons Wine Estate reported overall production levels down by 22% on 2019. Woodchester Valley Vineyard in the Cotswolds achieved their smallest tonnage since all their vines have been yielding.

Was it a Chardonnay or Pinot Noir year? It depends who you ask. Lyme Bay are particularly excited about the Chardonnay they have bought in this year: “2020 will be the year of the Chardonnay. Our 2020 Chardonnay will be fermented in a higher percentage of oak and new oak giving the wine an unparalleled complexity and depth”. On the other hand, Nyetimber have stated that “overall growing conditions this year generally favoured Pinot Noir.”

Regarding Bacchus, which can often see a sudden and dramatic falling off in acidity levels, Lyme Bay reported: “we are looking at some interesting wines coming together with excellent aromatics and some nice acidity”. I have personally tasted from tank some very ripe Bacchus from Essex, being vinified by new Cambridge urban winery Gutter & Stars, which nonetheless had fabulous freshness from good acidity levels. Bacchus has an extremely wide range of potential aromas and flavours, depending on ripeness levels; those who aim for the fresher, nettle, elderflower and gooseberry end of the spectrum will have had to pick very early.

The phenomenal ripeness levels have led several producers to increase their production of still wines, relative to sparkling, or produce still wines for the first time. Charles Palmer Vineyard in East Sussex, which has had notable success with its sparkling wines in previous vintages, is the extreme example of this, making the decision to produce 100% still wines in 2020 due to the “impeccable” quality of the fruit. Simpsons Wine Estate is set to move from one third still wines in 2019 to one half in 2020, and Camel Valley are producing “a lot more still wine and a lot less sparkling than usual”. Ashling Park are producing a still Pinot Noir and Chardonnay for the first time.

Of course, it is entirely possible that this trend is driven by economic factors too, with the more rapid cash inflow from still wines and the increased competition in sparkling wines from the significant plantings of the last few years starting to come on tap being very much in producers’ minds. But the ripeness needs to be there to make this a viable strategy, and 2020 has delivered that in spades.

So, in summary, despite some very real challenges in the vineyard, most particularly from the May frosts, 2020 has provided the potential to produce incredibly high-quality wines. Ashling Park say “2020 is proving to be an even better year than 2018 which back then was hailed as ‘vintage of the century’”. Wiston Estate are also claiming that 2020 is “even better than 2018”, and Woodchester Valley think it is their “best vintage ever”. While it is easy to be cynical about vineyards making such claims, the growing season of 2020 certainly makes it a plausible proposition.

I am very much looking forward to sampling wines from the 2020 vintage over the coming months, with the first still wines coming onto the market imminently (look out for Balfour Hush Heath’s “Nouveau” launching on 18 November!) and base wine tastings giving strong hints as to how 2020 English Sparkling Wines will turn out. English and Welsh wines may be some of the best things to have come out of 2020.

The elegance of RAIMES English Sparkling starts to happen on the south-facing slopes of its Hampshire vineyard. Here the chalk substratum lends a particular minerality that helps to achieve a delicate balance of ripeness, acidity and berry aroma. Wines are made in the traditional method using only grapes grown by the Raimes family. The 2018 Classic is a carefully selected blend of the three classic varieties: 62% Chardonnay, 19% Pinot Noir and 19% Pinot Meunier, bottle-fermented in the traditional method. The wine is partially fermented and aged in barrels, on lees for 30 months, helping to produce a soft, fine mousse. It has great minerality, fresh citrus characteristics and a hint of stone fruits filling out the profile. A super-long finish. 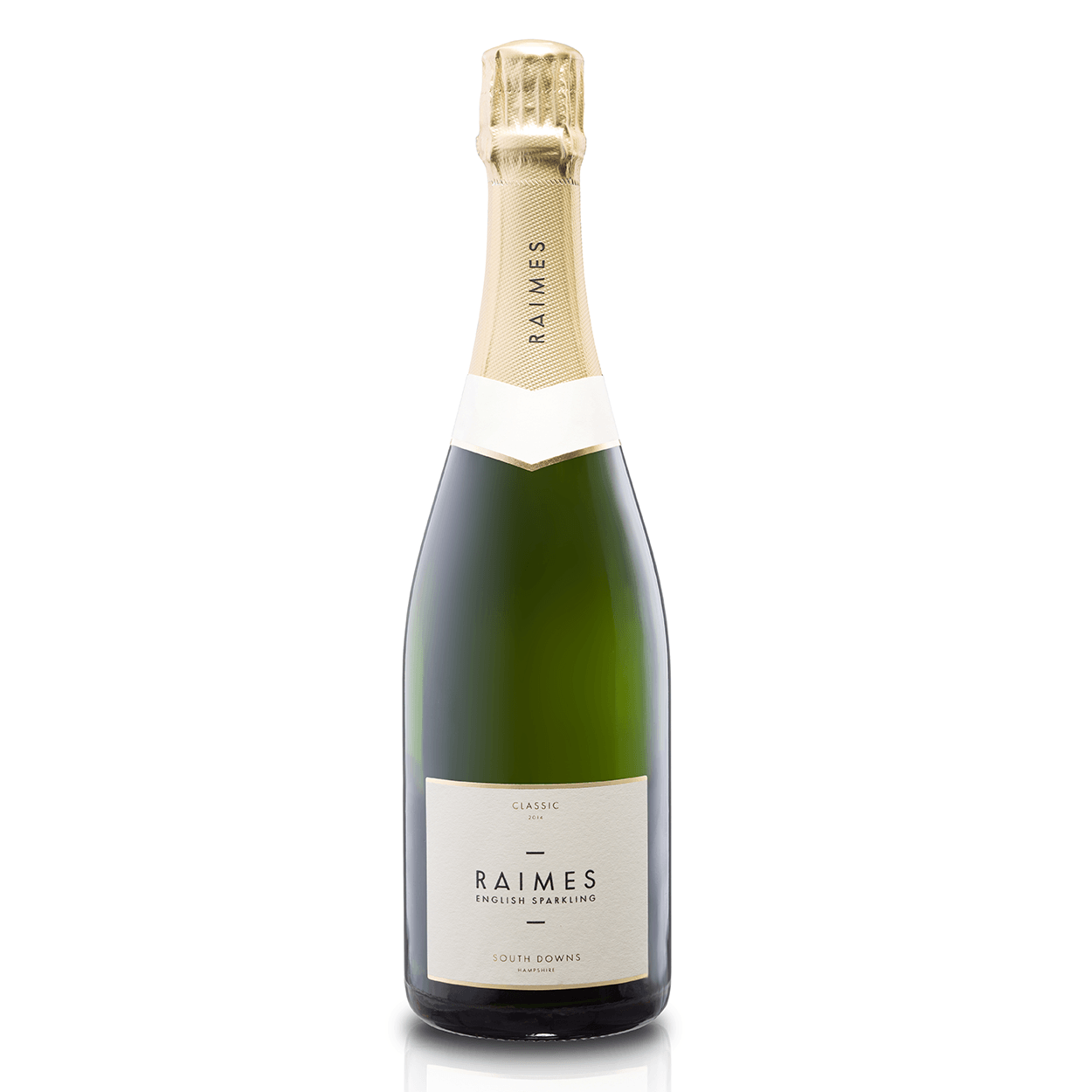